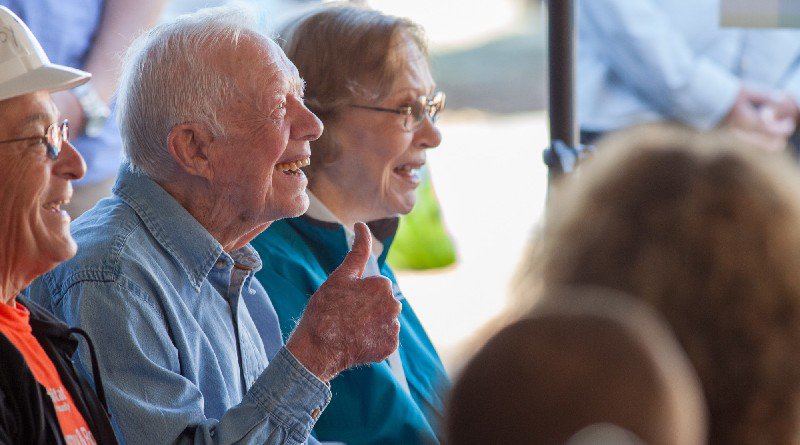 President Jimmy Carter was discharged from St. Boniface General Hospital early this morning after being admitted briefly for rehydration.

From July 9-14, President and Mrs. Carter joined thousands of volunteers for Habitat’s Carter Work Project to build 150 homes across Canada in celebration of the country’s 150th anniversary.

About Habitat for Humanity
Driven by the vision that everyone needs a decent place to live, Jimmy Carter started Habitat for Humanity began in 1976 as a grassroots effort on a community farm in southern Georgia. The Christian housing organization has since grown to become a leading global nonprofit working in more than 1,300 communities throughout the U.S. and in nearly 70 countries. Families and individuals in need of a hand up partner with Habitat for Humanity to build or improve a place they can call home. Habitat homeowners help build their own homes alongside volunteers and pay an affordable mortgage. Through financial support, volunteering or adding a voice to support affordable housing, everyone can help families achieve the strength, stability, and self-reliance they need to build better lives for themselves. Through shelter, we empower. To learn more, visit habitat.org

Did you know that Canada is celebrating its 150th anniversary in 2017? Habitat for Humanity’s Jimmy Carter & Rosalynn Carter Work Project is helping to mark the milestone by building 150 homes in Edmonton, Fort Saskatchewan, Winnipeg and other cities throughout Canada.

Future homeowners are building the places where their families will grow stronger and more independent, working alongside volunteers from the local communities, as well as across Canada and the United States.

Here are a few more facts about culture, people, places and the importance of housing in Canada.