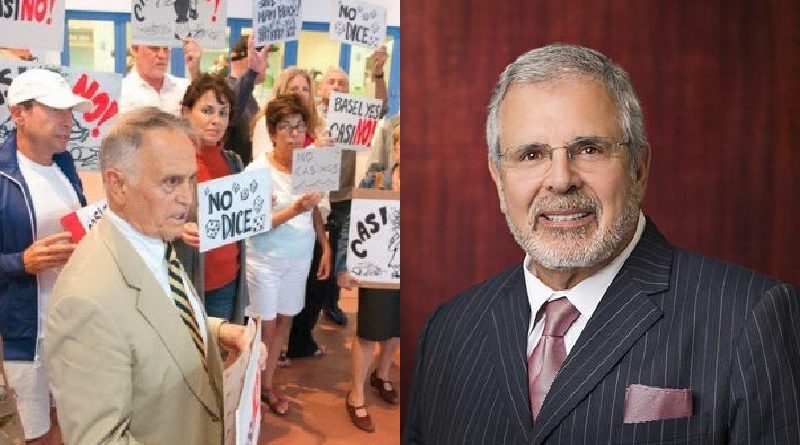 by: David Arthur Walters. Miami Beach activist Frank Del Vecchio sent out an email blast powered by Mail Chimp on 21 May 2018 calling his constituency to protest at City Hall:

“Don’t Be Fooled – Rally on Wednesday!”

A Land Use Committee meeting was on the agenda for that day to discuss the adoption of ordinances to increase the maximum heights for zones involved in the two-block development and to consider “the provision of a public benefit,” that benefit being a public park.

Quite frankly, people would barely know what is going on with real estate development if it were not for Del Vecchio’s expert advice over the years. Before retiring to Miami Beach, he served as an attack squadron pilot with the U.S. Naval Ready Reserve in South Weymouth, Massachusetts, from 1962 to 1966, while working as attorney and director of the Charlestown Urban Renewal project. He took a job with the District of Columbia Redevelopment Land Agency as director of the inner-city Shaw Neighborhood Development Program from 1966 to1970, and then went on to the U.S. Department of Housing & Urban Development, from 1970 to 1995, as New England Regional Director over Urban Renewal, Model Cities Program, Metropolitan Planning & Development, Community Planning & Development, and Homeless Programs, and also served as Regional Environmental Officer.

Now everyone has been duly advised by our Harvard law grad that Russell Galbut, a prominent local developer, and philanthropist with huge real estate holdings, was planning on erecting a “mammoth tower” at the South Beach gateway to spectacular Miami Beach. To do so he would allegedly fool the residents and their unwitting representatives into destroying zoning laws by selling him a street to allow for a higher density development, and by having his architect paint certain areas on the plans:

“In the last election,” Del Vecchio averred, “residents were promised that they, not developers, come first,” and now, to “sweeten a deal” to erect an unwieldy tower, “Galbut’s proposal claims a lot of parking space, shown as green on his drawings, but his ‘park’ is primarily non-permeable grass on top of building pedestals or garages.”

I submitted to Del Vecchio a drawing of the project published by the Miami Herald along with text that indicated the developer was providing plenty of park area, but he elaborated his perspective that the representation by Arquitectonica for Galbut was designed to fool the public, that is, it was impliedly a fraudulent representation:

“Check out the Crescent Heights proposal officially submitted to the city,” he responded, “as shown on the Land Use Committee May 23 agenda. The pedestal on all of the towers, irrespective of their height, takes up the entirety of the 500-block. None of the 500-block under the developer’s proposals is a public park. The green in the upper right-hand quadrant, which is adjacent to West Avenue, at the NW segment of the Crescent Height site, is shaded green, suggesting it is parkland is nothing of the sort. This is the so-called “Gumenick” site, which is in the RM-2 district, 49,000 sq. ft. of land with a FAR (Floor Area Ratio) of 98,000 sq. ft. attributed to it. Zoning prohibits the aggregation of residentially-zoned property, which this one is, with the commercially-zoned property, which is the abutting CD-2 district. The lot is currently paved and is used under a covenant with the Floridian condominium, opposite on West Avenue, 79-required parking spaces that could not be included within the Floridian and thus have to be provided nearby. Thus, that lot must always provide 79 parking spaces at that location. The developer is showing the rooftop of a parking structure at that location as “green”. It is not resilient; it is not permeable or previous. It is grass in loam on top of a concrete parking garage roof.”

“Gumenick,” by the way, refers to the Gumenick family that pioneered the development of towers along Biscayne Bay on West Side South Beach, beginning with Southgate Towers. The landmark Floridian, across West Avenue from the Galbut development, has been characterized as the family’s proudest project. A commissioner who attempted to get public access to the Baywalk in front of Southgate, characterized Jeffrey Gumenick, successor to Nathan and Jerome Gumenick, as a sweet man and saint, although the gate to the completed walkway remains locked.

I followed up with Del Vecchio on the alleged tomfoolery with the drawings. I pointed out that Rule 2.106 of the AIA states, “Rule 2.106: Members shall not counsel or assist a client in conduct that the architect knows, or reasonably should know, is fraudulent or illegal.” Since the protest has been called on the basis that an attempt is being made to “fool” the public by painting areas green as if they are intended to be parks, should not all government agencies that the architect does business with be warned and a complaint be filed with the AIA ethics committee?

“We are not focusing on what the architect may or may not be doing. We cite the applicant’s representations, which he has made publicly, including at the Tuesday Morning Breakfast Club presentation recently and at every session I’ve attended.”

But the park is a major consideration, and if Galbut had his agent misrepresent the facts on drawings, should not complaints be filed?

“It is tough enough to keep the message clear and simple,” he answered. “Overdevelopment and traffic congestion, and the city’s emerging resiliency policies, without drifting into related subjects. I’m involved in raising community awareness and informing the public. Professional ethics are an important issue, for sure, but right now it is an enormous hurdle simply to identify the applicable law and the facts.”

He is correct about the difficulty in identifying the facts. I proposed the question of fraud to City Manager Jimmy Morales, and I expressed my view that the entire property involved should be developed as a park area, which he had at one time recommended.

Indeed, if I were a dictator, I would impose a ten-year moratorium on the development of new structures, seize the 500-700 Alton Road property from Galbut interests and convert it into a park with underground parking for visitors to park their cars and take free trolleys wherever they wish to go on Miami Beach. Miami traffic is already making people meaner than can be, and older South Beach residents are madder than hell with the miamización of their once quaint and affordable sanctuary as yuppies and millionaires accustomed to crowds flock in.

Morales responded that there are so many plans and drawings involved that he could not speak to the issue of fraud. Nonetheless, he was all for the city acquiring one of the blocks for a park.

So the planning is fluid and nobody knows the outcome.

Russell Galbut has demolished most of the structures and has enclosed the area with beautiful fencing.