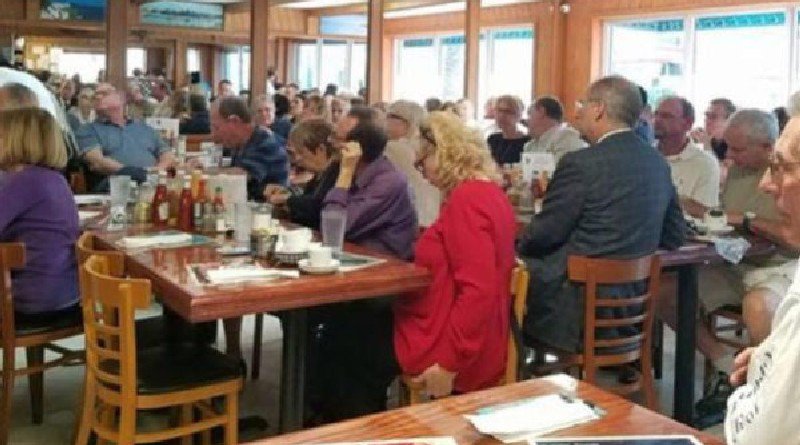 Former corruption prosecutor and state representative Dan Gelber is a dozen horse lengths ahead of his fellow candidates. He will become the mayor of the City of Miami Beach absent an unanticipated accident or damning revelation before the election. Therefore, his participation in a “debate” moderated by Frank Del Vecchio at the

Tuesday Breakfast Club meeting this Tuesday at Puerto Sagua provided further information on what he may do for a community traditionally plagued by corruption no matter who the mayor is.

He said his long experience as a federal prosecutor taught him that the best way to stop corruption is to elect officials that you “think” are honest and incorruptible.

Geber’s public thinking about corruption led his most formidable opponent, Commissioner Michael Grieco, a former state prosecutor, to drop out of the mayoral race in favor of running for his incumbent seat. Grieco would soon drop out of that race as well, for family reasons, he said.

The Miami Herald emphasized the thought that Grieco might be charged or indicted any day for high crimes and misdemeanors related to the alleged laundering of foreign money into a political action committee for the ultimate benefit of his campaign.

“He says he quit Beach election for the family. It was actually a criminal investigation,” read the Miami Herald headline on 26 September, although it was not explained, if that were true, why he did not drop out altogether in the first place, when the revelations about the PAC were made, instead of running for his incumbent seat. He has not responded to my queries on the subject.

Gelber also addressed the effort led by Frank Del Vecchio, who lives on Ocean Drive, to clean up the popular

Ocean Drive nightclub mile by prohibiting the sale of alcohol in nightclubs after 2 AM although allowing it in hotels. A study reportedly paid for by a hotel and restaurant association concluded that the reasons given for the early closure of the nightclubs were spacious and that it would cost billions in revenue to businesses over time and a loss of millions of tax dollars. That study has been in turn denounced as fake, and a report from the only “legitimate” outlet, the Miami Herald, as to its legitimacy, is awaited.

The legislation has been referred to the public to decide by referendum. None of the candidates for elected officials appear to be in favor of the legislation. The consensus among politicians is that the question should be decided by the commission, perhaps as a zoning issue, and not by the public. Gelber thought the issue should be considered more carefully before being decided upon.

Crime ran rampant in the Entertainment District including Ocean Drive after the election of the incumbent mayor and wealthy developer Philip Levine and the installation of his city manager, Jimmy Morales, and the police chief, Daniel Oates.

Levine was said to have used his fortune to “purchase” a majority on the city commission and thus render himself a strong mayor in a city with a weak mayor charter. His “meanness” and “appearance of corruption” have alienated the majority of voters. He is planning on running for governor instead of another term as mayor.

Gelber, again referring to his experience as a prosecutor, observed repeat offenders, around ten percent of the criminals, commit seventy percent of the crimes. The police should not be blamed for “predators” who are arrested time and again only to be released by the courts the next day to return to the scene of the crime, the lucrative tourist district, to commit more crimes.

He congratulated the efforts of a vigilant citizens’ organization, whose members are kept secret to prevent retaliation, in keeping tabs on the predators and monitoring court cases. He suggested that the monitors should make sure the judges are fully informed on the nature of the public nuisances brought before them. Attempts have been made to do that in the past to no avail because judges charged with enforcing the habitual criminal ordinance are seldom publicly exposed for their negligence and discrimination or reluctance to overcrowd the jails with petty professional criminals.

Gelber discussed a crucial matter early on, the structure of city government. He indicated that he had not read the city charter, but he obviously understood that the city manager is like a CEO who is responsible for implementing the policy of a board of directors; here, the city commission.

He objected to direct interference by commissioners in the management of the city.

In fact, a truly “weak” mayor, who has one vote on the commission and may not veto legislation, is responsible for relations with the administration. The commissioners should theoretically stick to policymaking.

But what should they do if their constituents complain that the administrators are not following policy, and the mayor is either negligent, or corrupt, or the pawn of the bureaucracy?

In any event, if a city manager does not please four of seven people sitting on the commission, he may be fired.

Jorge Gonzalez, the former city manager, claimed that the corruption alleged against his administration, and therefore imputed to him, was seated on the commission. When he took the publicized demand to fight corruption seriously and proceeded to do just that, he was abruptly discharged although he offered to stay on a few months to use what he knew about everyone to curb corruption.

A question was submitted to moderator Del Vecchio, along the lines of Why is the commission blamed for interference in the administration by Gelber when the charter calls for a strong city manager and he should be fired for being weak?

Instead of asking the candidates this question alone, Del Vecchio obfuscated, clouding it with another question, roughly: What should be done about the squabbling on the commission?

The question as to whether the city manager should be fired was left behind in the confusion, and that is very question people intimate with the daily conduct of the administration are asking. After all, Levine is a wannabe strong manager. When real strong mayors leave, their chief administration leaves with him.

Many people are dissatisfied with what is called the New Regime. Jimmy Morales, a political insider, who was not

even on the list of the persons selected as candidates by the professional recruiting firm hired by the city, was appointed city manager by an allegedly corrupt faction of the city commission. Phil Levine took the throne as a strong mayor with his slate. Police brass involved in reforming the police department, and the city at large via a special internal affairs program, were discharged without thanks. Celebrity Daniel Oates of Colorado was recruited to head the police department.

Therefore, it was said that “King” Levine reigned, and “Chancellor” Morales acted accordingly, although the relationship was upside down because Levine the businessman should be city manager and Morales the politician should be his boss.

Now both should run for governor of the state. Morales would be better qualified for the job. Levine has the money and political connections via his friends and recipients of his support, the Clintons.

The first and most important question to the candidates for mayor and commissioners should be, given all the complaints about the administration, “Will you replace the city manager and the police chief?”

Their answers and reasons given therefore would demonstrate how much they know about how the city works, or not. So far they are talking about the superficial aspects.

If they hem and haw, to say they would sit down with them, go over this and that, et cetera, what you will have is business as usual, and Solomon’s old saw shall be proven true for the City of Miami Beach.